The European University Sports Association (EUSA) held its 2014 General Assembly on April 5, 2014 in Denizli, Turkey, celebrating its 15th anniversary. The Assembly was accompanied by the EUSA Executive Committee Meeting, held on April 3, EUSA Conference held on April 4 and concluded with a special Gala. EUSA events in Turkey were hosted by the Turkish University Sports Association (EUSA).
The Assembly was opened by EUSA President Mr Adam Roczek. 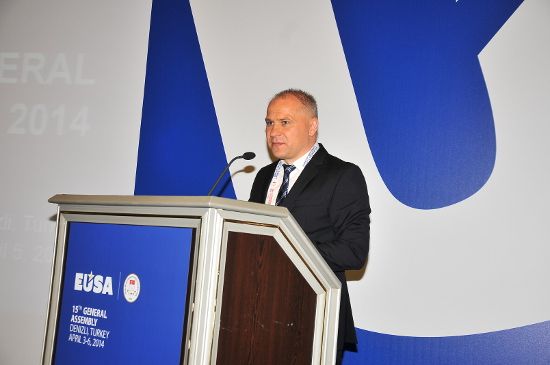 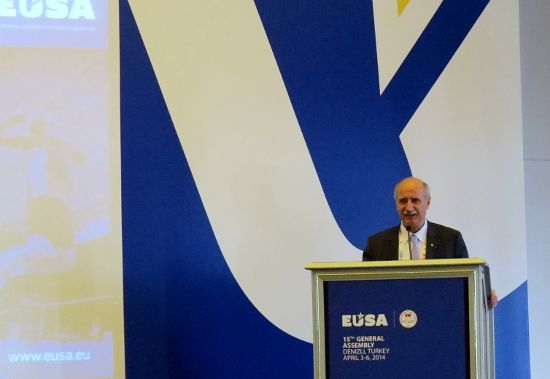 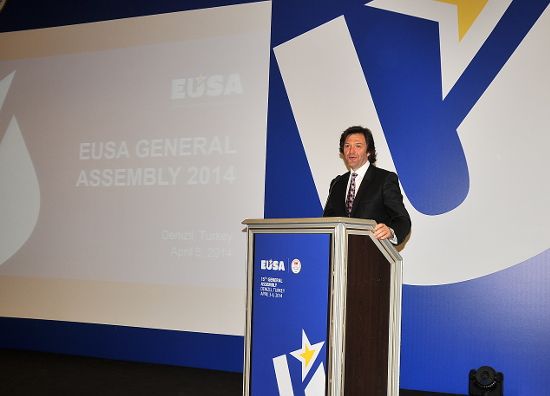 Mr Suleyman Kocasert on behalf of the local hosts extended the welcome and satisfaction to be able to host the gathering of the highest body - EUSA Assembly - in Denizli. 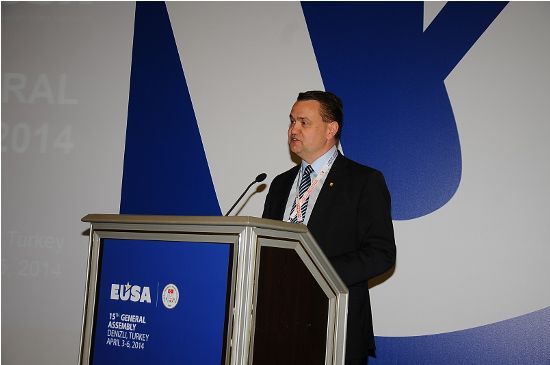 Welcome address was given also by the Vice-President of FISU Mr Stefan Bergh, congratulating EUSA on its achievements and development. 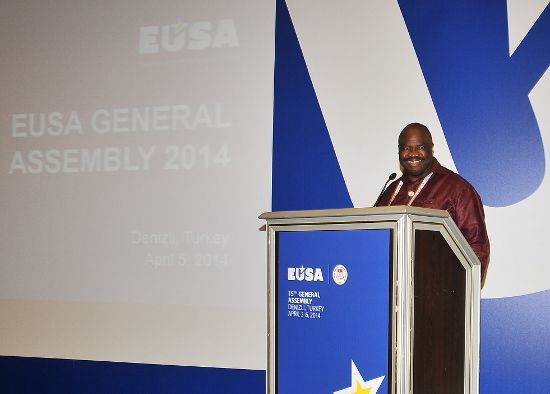 Representatives of other continental federations also addressed the audience – on behalf of FASU its President Mr Ralethe Malumbete and on behalf of AUSF its Vice Secretary General Mr Xue Yanqing. 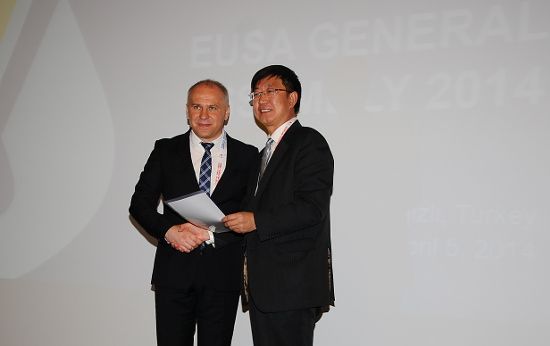 Before the official part of the Assembly started, special remembrance and tribute was given to the late President of the Italian University Sports Federation (CUSI) Mr Leonardo Coiana who passed away in January. Mr Romano Isler, EUSA and CUSI Executive Committee Member made a commemorative speech, followed by a minute of silence in the honour of Mr Coiana. 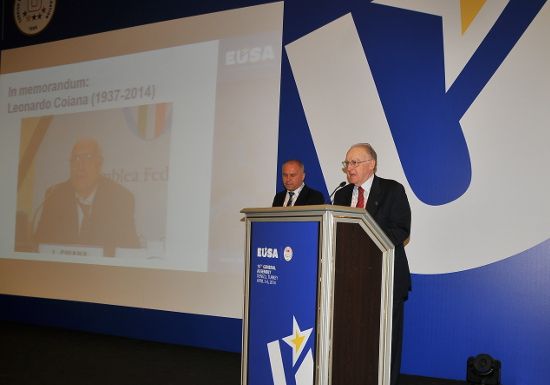 On the proposal of the EUSA Executive Committee, the Assembly confirmed Mr Nico Sperle, former President of the German University Sports Federation (ADH) as the Chairman of the Assembly. 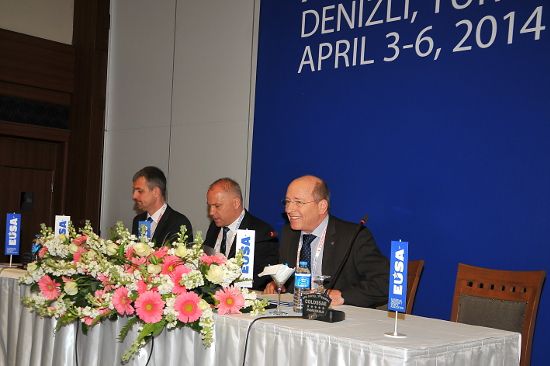 After approving the agenda of the current and the minutes of the past assembly, EUSA President Mr Roczek presented the outlines of the most visible accomplishments of EUSA in the past year. 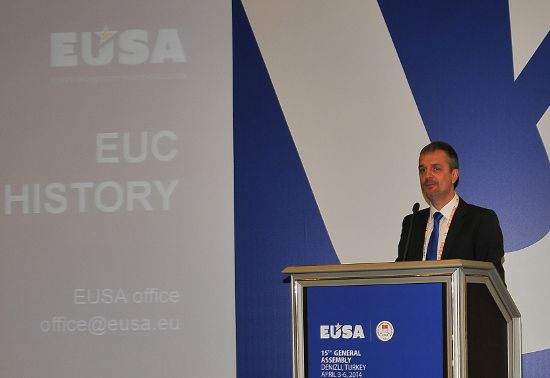 The floor was then given to EUSA Secretary General Mr Matjaz Pecovnik, who presented in more details the successful season of the European Universities Championships in 2013 and pointing out the trends of the participation in these events. 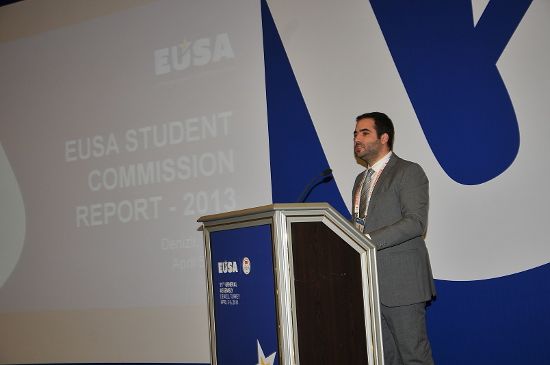 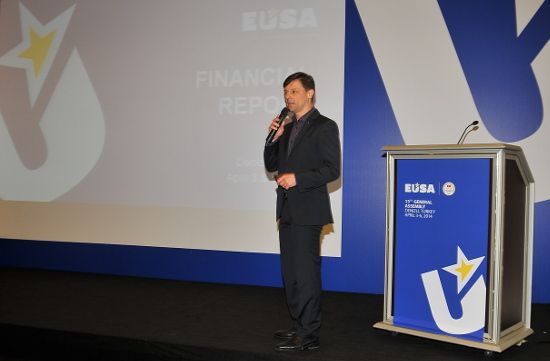 The annual report was concluded with the financial presentation and annual accounts, done by Mr Olaf Tabor, EUSA Treasurer. He thanked the EUSA members for their cooperation and understanding in the process of restructuring EUSA finances in order to stabilise the organisation also through the prism of finances. 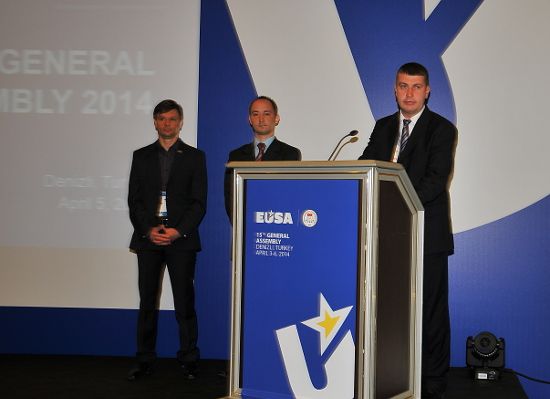 The auditors report was given by Mr Zoltan Rakaczki and Mr Marian Matac Liviu, reporting on the overview of the past year through the audit and evaluation of the financial operation of the organisation. 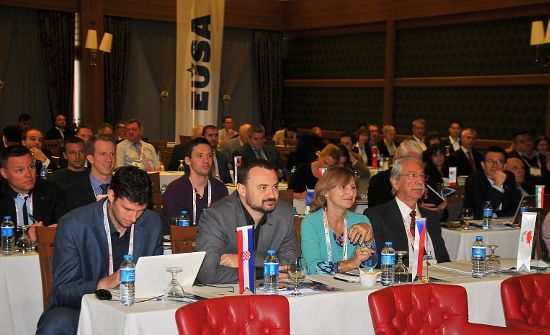 The Assembly also approved the procedures for the elections already this year, as the next assembly, to be held in 2016, will be electoral one. EUSA President Mr Roczek presented the Activity plan for 2014-2015, the period until the next assembly, followed by EUSA Treasurer Mr Tabor for the financial part. 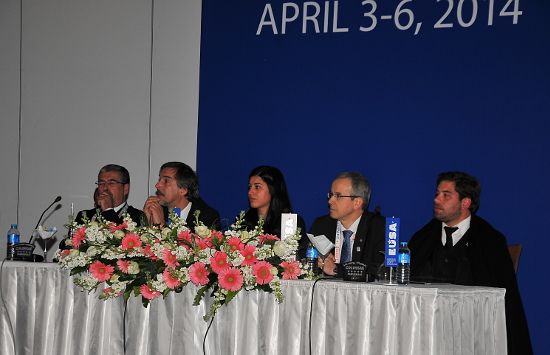 Last part of the Assembly was devoted to the presentations of the candidate cities Coimbra, Portugal and Tampere, Finland, for the organisation of the European Universities Games 2018. The cities were able to promote their candidatures already during the breaks. 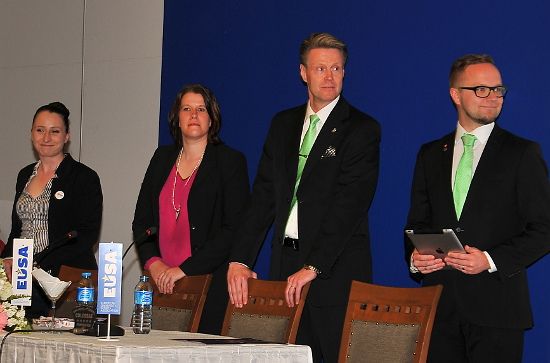 According to the draw made on April 3 at the EUSA Executive Committee Meeting, the bidding committee of Coimbra held the presentation first, followed by the bidding committee of Tampere as the second candidate. The decision of the host is to be made by the EUSA Executive Committee members and the results announced during the special EUSA Gala in the evening. 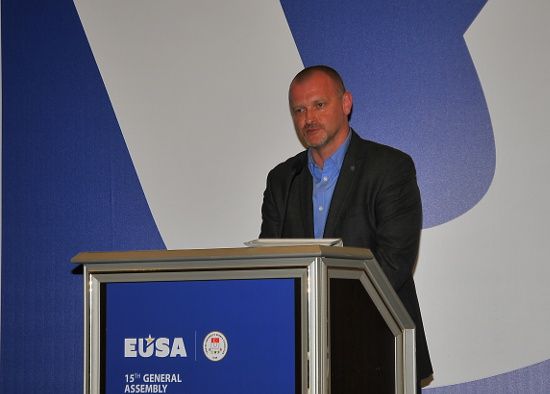