European University Sports Association (EUSA) held its 14th General Assembly in Funchal on the Island of Madeira, Portugal, hosted by the Academic University Sports Federation of Portugal (FADU). The main part – the Assembly itself – was held on March 16; while in the days prior to the Assembly, the EUSA Executive Committee Meeting and the EUSA Conference were organised in Funchal as well. 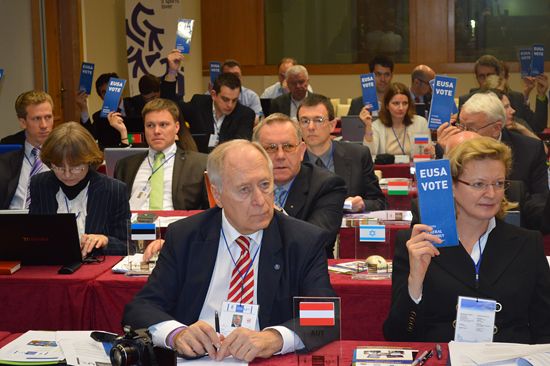 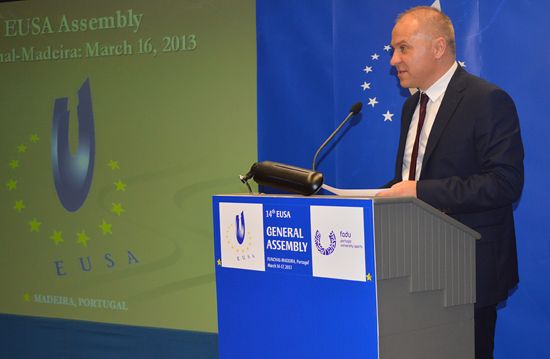 Distinguished guests were then invited to address the participants, first from the family of the international university sports. including Mr Stefan Bergh, FISU Vice-President and Mrs Penninah Kabenge, FASU Secretary General. 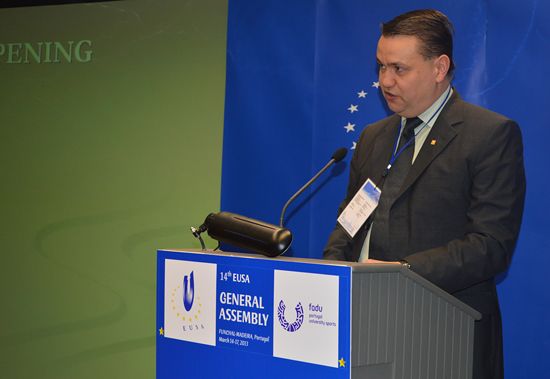 On behalf of the European Commission, Mr Gianluca Monte, Policy Officer at the Sport Unit in Directorate General Education and Culture, addressed the participants, commending the work EUSA is doing on European, as well as on national and local levels. 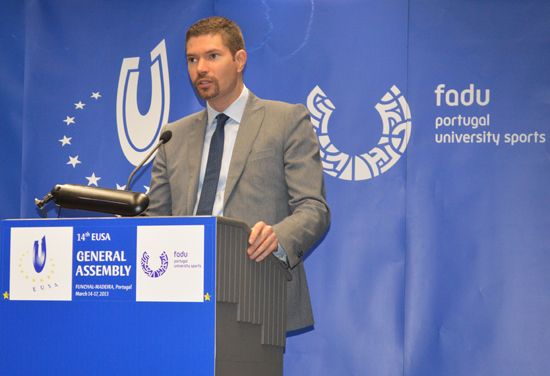 The Assembly confirmed Mr Barracosa as the Chair of the Assembly, and he joined the EUSA President Mr Roczek, Secretary General Mr Matjaz Pecovnik and Legal Advisor Mr Thomas Loher on the podium to chair the assembly. 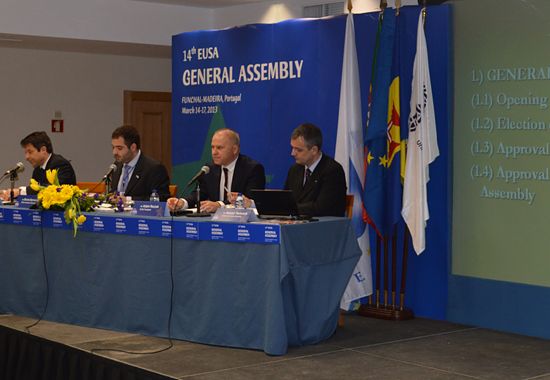 On behalf of the Executive Committee, EUSA President Mr Roczek started the agenda by presenting the activity report of the previous year, focusing on the many successes EUSA triumphed in the year 2012; most visible being the European Universities Games in Cordoba. Activities in the sports programme also encompassed the work done in preparation of the 2nd edition of the Games in Rotterdam in 2014, and also the bidding process for the 2016 EUSA Games, resulting in two candidates – Coimbra, Portugal and Zagreb-Rijeka, Croatia. He also presented the European Universities Championships, the events to be held in 2013, as well as that all events have been attributed for 2015, and also EUSA events receiving its Patronage. 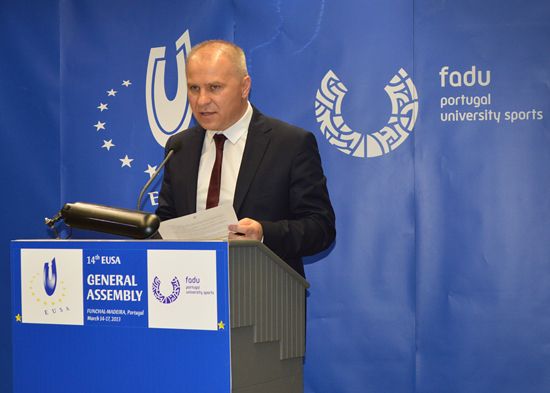 Outside of the field of sporting events, EUSA was very active with internal meetings of the Executive Committee, Commissions and working groups, International Cooperation with FISU, Continental organisations and other NGOs, also with educational projects and projects with social responsibility, some partially funded by the European Commission. 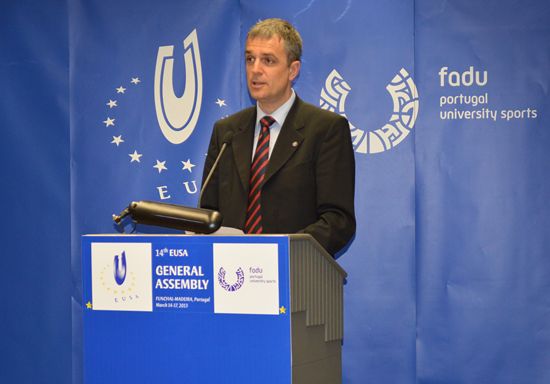 The success of the sports events was explained in more details by EUSA Secretary General Mr Pecovnik, who presented some impressive facts and figures related to the 1st edition of the European Universities Games, held in Cordoba, Spain in 2012. For example, 2.574 participants competing in 252 university teams representing 154 universities from 32 countries were present in Cordoba. He also presented top teams by participation in terms of teams, universities and countries. 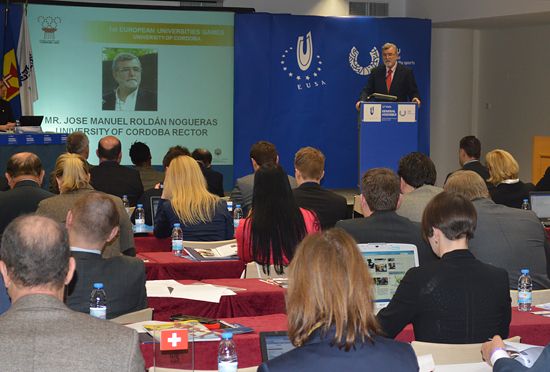 On behalf of the Organising Committee, Mr Manuel Torres Aguilar, Chairman of the OC EUG 2012 and Mr Rifaat Chabouk, Event Operational Manager presented the final report of the project, sharing also the best practices and keys to success according to the experiences of the Organising Committee. A short movie summing up the Games was then showed and all the participants received copies of the photo and video material from the Games. 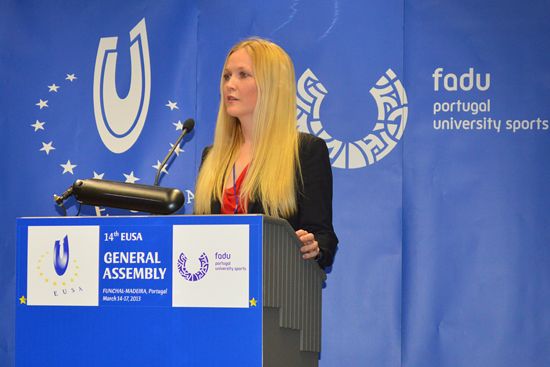 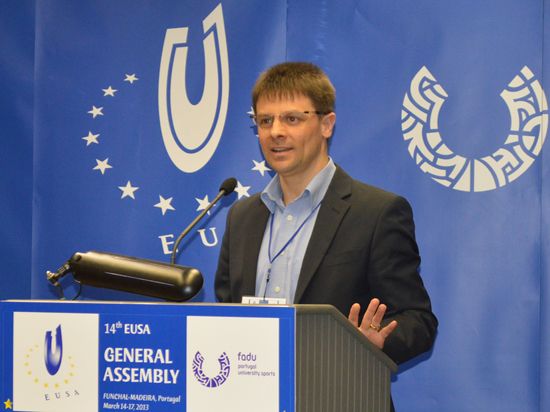 On behalf of the Executive Committee, Annual Accounts were presented by Mr Olaf Tabor, the EUSA Treasurer, summing up the activities through the financial aspects and explaining the EUSA incomes and expenditures for the year 2012. 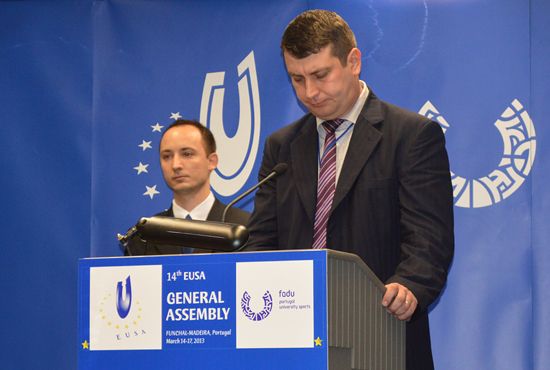 Mr Marian Matac Liviu and Zoltan Rakaczki, EUSA Auditors presented the report from the audit meeting held in January, complimenting the work of EUSA and giving the positive opinion about the financial operations for the previous year. 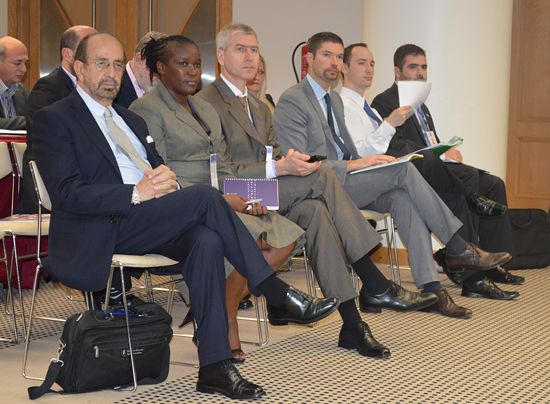 Mr Roczek thanked the delegates, partners, guests and friends of University Sport for their involvement in the successes of the organisation. He specifically thanked his Colleagues from Executive Committee, Commissions, Workings Groups, Honorary President and EUSA office. As a special thanks he addressed Continental organisations and FISU with its President Mr Claude Louis Gallien, stating that without permanent support received from FISU, EUSA goals would be hard to achieve. He also added that partnership with Asiana Airlines played recently extremely important role in developing of EUSA. He stressed that huge commitment of National University Sports Associations, participating Universities, activity and passion of individuals is the driving force of EUSA. 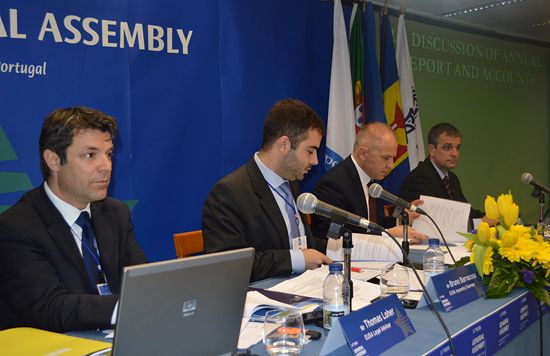 An important part of the Assembly was then focused on the motions on the modification of the Statutes and other motions. The Executive Committee proposed some changes to the Statutes in order to define the social responsibility of the organisation also in its core document. Other changes were proposed to offer possibilities of extended cooperation, focusing on priorities, having the General Assembly on biannual basis, starting from 2014 onwards and synchronising some parts of the Statutes to be more in line with FISU and other international organisations. The proposals were then reviewed by the members, and voted after clarifications and discussions. 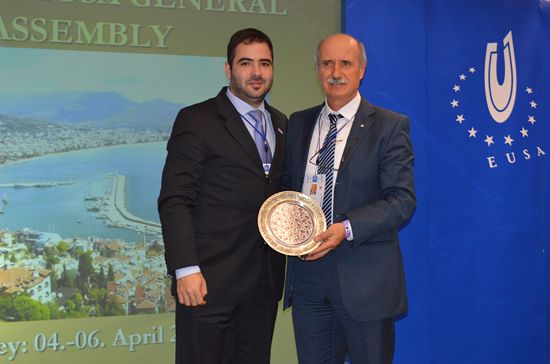 After the motions, the Executive Committee presented the Activity plan and the budget for 2013, and the proposal to honour former EC members Mr Wolf Frühauf, Mrs Alison Odell, Mr Dinos Pavlou and Mr Filipe Santos with the title of Honorary members, recognising their important work and contribution to EUSA. All were accepted by acclamation, and will officially receive their awards at the next year’s Assembly, which will be held in Antalya, Turkey between April 3 and 6, 2014.