The four days spent in Crete allowed the participants to study some key areas of student sports as well as soak up the rich culture of the birthplace of Socrates, the founder of the ancient Symposiums. The discussions focussed the relevance of the Olympic Ideology in today's society, particularly student sports, so the theme was "Universities and Olympic Idea".

With the opening day dedicated to establishing the ancient concepts of Olympism and its relevance in today's society - delegates debated the pollution of these ideals in modern society and the role that student sport can play in re-establishing these pure concepts. In addition to this theoretical discussion the attendees also looked specifically at EUSA and discussed ways in which the organisation could develop embracing some of the noble concepts of the Olympic movement on the way.

With 15 countries present and 43 delegates (28 students) the Symposium marked an important step forward for this EUSA event. 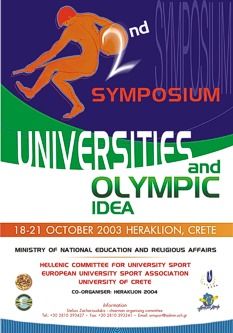