6th European University Volleyball Championship was organised in the city of Eindhoven from July 2-9, 2006, alongside EUC Football, EUC Tennis and EU Water Polo Cup, and was the first major EUSA multi sport event.

This year’s women’s championship included thirteen teams, with the men’s team increased to nineteen teams. This is by all means a clear record participation in EUC Volleyball, by over 50% and is a great success of the Organising Committee, special when taking into account the running of three other events.

All the participants and EUSA delegates were accommodated at Center Parcs village ’De Kempervennen’, located at a travelling distance of 40 minutes from the University Sports’ Centre. Because of a little bit longer distances to sports centre, buses were organised every 15-30 minutes.

The Opening ceremony was held in a city plaza of Eindhoven on 3rd of July. The official part started at nine o’clock and ended about an hour later. Before and after this official part, however, there was some entertainment at the plaza: some drinks, a fire act, music, a Capoeira demonstration, and a band performance. Furthermore, during the opening ceremony a great work of art was introduced and completed during the ceremony. Because of early start of competition next morning, touring cars brought participants back to the sleeping accommodation starting directly after the official part of the ceremony.

The sixth EUC Volleyball took place in three sport halls of Student Sport Centre, two of which were used for matches. The other was available for warming-up and training purposes.

Five playing days were scheduled for the tournament, with the final games being played on the last day. In the women’s competition Eindhoven (NED) won, with La Sapienta Roma (ITA) the runners up, and in the men’s competition Eindhoven (NED) were winners, with Surgut (RUS) second. On this tournament, it was not just hard work and no fun, but there were also many interesting social activities, like workshops, film evening, Eindhoven sightseeing, student’s parties.

Saturday evening on the 8th of July, the prize-giving ceremony took place, where all winning teams were honoured. The ceremony started at nine o’clock, and finished when Tiina Beljaeva as EUSA delegate closed the championship. After the closing ceremony, all participants and volunteers were invited for the final party in the Effenaar. 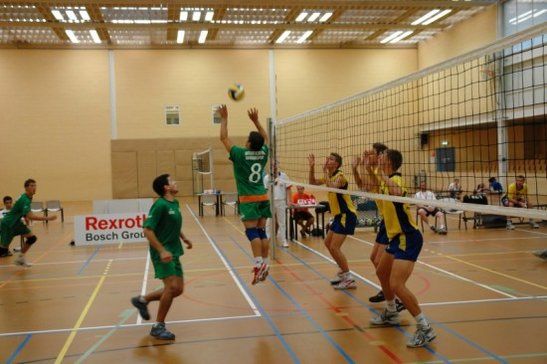