This year’s championship took place in Eindhoven, Netherlands, from July 2-9, 2006, and was combined with three other sports championships: Tennis, Volleyball and Water Polo Cup. The organiser of this major and biggest event this year was the Eindhoven University of Technology.

Participants were accommodated at Center Parcs village ’De Kempervennen’, located at a travelling distance of 40 minutes from the University Sports Centre. The transport was well organized. Buses were ready every 15-30 minutes, and they took students directly to the sports centre.

The fourth EUC football was held at the football pitches of sport centre “De Hondsheuvels”, which is a 5 minutes’ walk from the Student Sports Centre. There were five official size pitches available. At the centre, 14 changing rooms and decentralised cafeteria was available for the competing teams. At the tournament, there were 14 teams for men competition and 7 teams for women competition.

After the second day of the championship, on 3rd of July, there was an Opening Ceremony in the city plaza. It started with a Capoeira show and live music, some speeches were held and a big ball was covered with flag tabs of all participating countries.

Besides hard work, all players could enjoy a variety of different social events (bar hopping, Eindhoven sightseeing, film evening, student parties, work-shops). Probably the most interesting thing for all football teams was live coverage of semi-finals of the World Football Championship, which was shown on a big screen in a hall at ’de Kempervennen’. On Saturday evening, 8th of July, the prize-giving ceremony took place, where all winning teams where honoured and awards for fair play team were presented. The ceremony started at nine o’clock. For men’s competition it was given to ETH Zurich and for women’s competition to University of Tartu. After the closing ceremony, all participants and volunteers were kindly invited for the final party in the Effenaar. 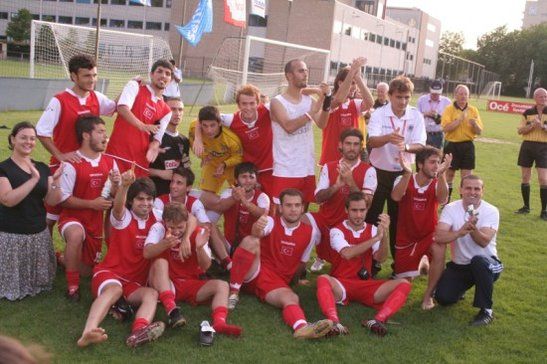