The 3rd European University Futsal Championship took place in Novi Sad, Serbia, from July 16th to 24th. 14 male university teams from 12 countries participated at the championship, which was organised by the University Sports Association of Serbia.

Once the participants arrived, they were transferred from the airport to a student’s dormitory accommodation, which included double room with a bath and balcony, or a single room, if required. Participants were offer daily a buffet at the restaurant in close vicinity of the Sport Hall and water was offered to the teams in each mach.

The Opening ceremony was held on the 17th at nine o’clock. Introduction programme consisted of the parade led by a hostess and a team representative carying a national flag. During the opening ceremony, anthems of EUSA and Serbia were performed. Among prominent guests were university and government representatives.

Competition took place at Sports and Business Centre Vojvodina. Games were played in sport hall that has a 1000 people capacity. The tournament began on Monday morning. The teams were divided in 4 groups; best two teams from each group qualified for the quarterfinals.

One day before the quarterfinals, on the 19th, there was a party held at Amareto club, and on the 20th, which was a free day, there was one excursion, free of charge for all participants. Excursions to Belgrade gave the teams the chance to rest and see some interesting sights of the Serbia capital.

The closing ceremony also included speech of the EC Representative and the passing of the EUSA flag to the Chairman of the next Organising Committee.

OC took a large number of activities in order to promote the championship in the best possible manner. In order to increase the public attention, a special focus on this event was given in different newspapers. All major newspapers wrote about this event, while other media broadcast it daily.

The next EUC will be organised in Koper, Slovenia in July 2007. 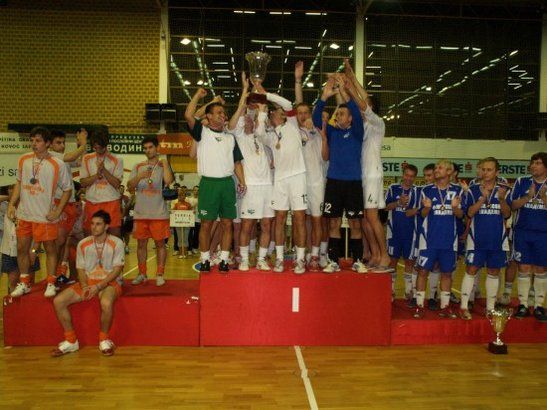