All the teams, EUSA representative and technical delegate were accommodated in the hotel VIP Berna. Students were placed in double and triple rooms with hotel services available. Catering for participants was organised in the University of Lisbon Canteen, serving both national Portuguese and European food.

Students needed to go to the sports centre by themselves, so the OC supplied everyone with metro cars. Many students who like walking and doing a little bit of sightseeing at once, decided to walk.

Opening ceremony was organized in the sport centre, on the 13th. It started with the great parade of teams, different dancing shows and Portuguese folk music. At the end, the president of the University Stadium declared the Championship open.

During the tournament, there was a variety of different open-air parties near the University of Lisbon Canteen, for competitors to rest a little after hard games. Everything from dancing to karaoke was provided. On the evening before the finals, there was a big barbecue party, and the night was long for many participants, except for the best players, who had matches for the medals on Sunday morning.

The finals were played on July 16 and were followed by the awarding ceremony. Cups and the diplomas were given at the closing lunch, which was held in a restaurant “A Trindade”, located in old Lisbon. The EUSA flag was handed to the officials from Saint Petersburg, where the next EUBC will be held. 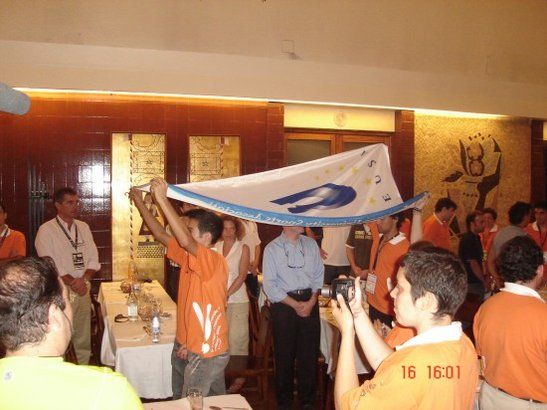