The 2016 EUSA Convention started with a seminar for Technical Commission and Delegates at the Hotel Golf in Bled, Slovenia, on September 23.

The President of the European University Sports Association (EUSA) Mr Adam Roczek, in the company of the Technical Commission Chair, Mrs Ivana Ertlova welcomed EUSA family members to the Convention. As this was the first time the Technical Commission met in this composition after being nominated in August. Secretary General Mr Matjaz Pecovnik facilitated in the introductions, presenting also the EUSA office team to the technical commission members and delegates, giving a chance to everyone to introduced themselves. EUSA Sports Manager Mr Patrik Perosa provided a historical overview of EUSA statistics, and then displayed a more detailed account of the statistical data for the European Universities Championships 2015. This was followed by Mr Marko Zunic who gave a detailed report into this summer’s European Universities Games in Zagreb and Rijeka, including sports for students with disabilities being introduced into the programme for the first time in EUSA history. The participants also got familiarised with the preparations for the upcoming Championships and Games. EUSA President Mr Roczek concluded this internal part of the convention, thanking the delegates and commission members for their enthusiasm and participation. In the afternoon, the main part of the EUSA Convention started. The participants of the EUSA convention – organisers of the European Universities Championships 2017, European Universities Games 2016, 2018 and 2020, Technical Commission and Medical Commission members, EUSA Office and invited guests, were greeted by the Mayor of Bled, Mr Janez Fajfar at the start of the evening session. 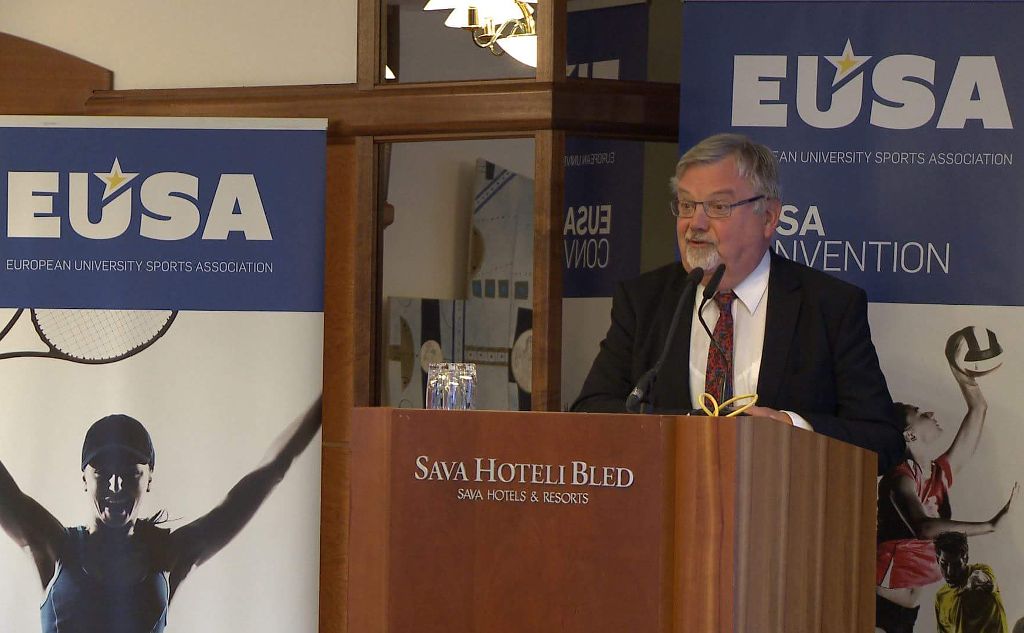 Also in attendance were Mr Milan Zvan, President of the Slovenian University Sport Association (SUSA) and Mr Miro Cerar, Vice-President of the European Fair Play Movement (EFPM) who addressed the participants as well. The day started with an optional 6km morning run around Lake Bled. EUSA - European University Sports Association, being an official partner of the European Week of Sport, contributes not only by promotion of activities but also organising sports and educational events, engaging people in physical activity and encourage them to #BeActive during the Week and throughout the year. Chair of the medical commission Ms Abosede Ajayi discussed the medical service requirements related to the organisation of the events. After a short coffee break the morning session restarted with an introduction of partner companies – first presenting the result management system by Mr Marin Furcic from FurkiSport, followed by presentation of the importance of visual identity by Mr Tomaz Gaube from Kraft & Werk. Presenting a practical example, the 2015 European Universities Sport Climbing Championship in Katowice, Mr Michal Walusza shared their experience, which was seen as a good practice model for the EUC 2017 to follow. EUSA Communications Manager, Mr Andrej Pisl returned to the front to discuss the importance of volunteers and introduced the EUSA volunteer programme to the organisers. EUSA sports manager Mr Patrik Perosa concluded the day’s working sessions and again thanked everyone for their participation in the convention, inviting them to Lake Bled once more to engage in some more #BeActive activities. The convention participants walked around the water’s edge to reach the boat house before taking to the water, using rowing boats to reach the idyllic island within the middle of Lake Bled.

The event concluded in the evening with a dinner at a restaurant overlooking the City and Lake Bled where Secretary General Mr Matjaz Pecovnik thanked all of the guests for their participation and wished them the best of luck in their European Universities Championships in 2017.